The house mouse is the most commonly encountered and economically important of the commensal rodents, the Norway and roof or black rats being the other two.
House mice are not only a nuisance, they damage and destroy materials by gnawing, they eat and contaminate stored food and are carriers of disease harmful to human health.
House Mice are thought to have originated in Central Asia but it is now found across the globe and is a global pest.
An adult mouse is around 70mm-90mm long plus tail of about the same length on top. 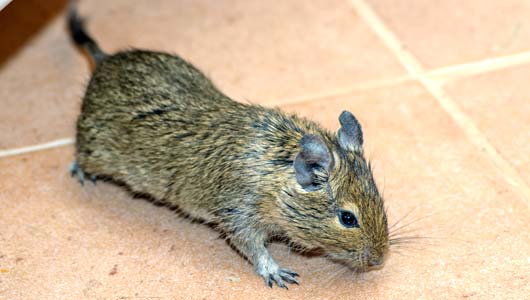 The Signs of Mouse Infestations:

The house mouse is a prolific breeder. They reach sexual maturity in 35 days. Pregnancy lasts an average of 19 days. The average litter size is 6 , with about 8 litters per year, but averaging 30-35 weaned per female per year. Therefore, a female can have a new litter about once every 40-50 days. More than 1 litter may be present in the nest at one time. Life expectancy is normally less than 1 year, but mice have been known to live as long as 6 years. Over a 6-month period, a pair of mice will eat about 2kg of food, produce about 18,000 droppings, and void about 350ml of urine. The most common way mice transmit disease organisms is by contaminating food with their droppings and/or urine. The most threatening organism spread by mice is Salmonella, a cause of food poisoning, spread via droppings. Other transmittable organisms include tapeworms via droppings, rat-bite fever via bites, infectious jaundice/leptospirosis/Weil's Disease via urine in food or water, a fungus disease (Favus) of the scalp either by direct contact or indirectly via cats, plague and murine typhus via fleas, Rickettsial pox via the mite Liponyssoides sanguineus (Hirst), lymphocytic choriomeningitis via droppings, and possibly poliomyelitis (polio). Another problem is house mouse mite dermatitis which is caused by these mites when they feed on humans.

The key to any mouse control program is pest identification, sanitation, harborage elimination, and mouse-proofing the building.
Control is based on the behavioural habits of mice.

"House Mice are thought to have originated in Central Asia but it is now found across the globe and is a global pest."

Israeli scientists have tested mice as a new form of airport security detector. It consists of three concealed cartridges, each containing eight specially trained mice. If they sense traces of explosives or drugs, they will trigger the alarm. According to the New Scientist, the mice work four-hour shifts and are more accurate than using dogs or x-ray machines.